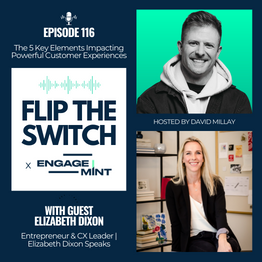 To design a first-class customer experience, it starts with the mindset, the stories we’re telling ourselves internally and the framework for how we’re viewing the world and aligning it with what we want to create for people around us.

In this episode, David sits down with Elizabeth Dixon, entrepreneur and business leader at Elizabeth Dixon Speaks.  Elizabeth has worked for or alongside several customer-centric organizations, including her current role of Principal Lead of Strategy, Hospitality and Service Design at Chick-fil-A corporate.  Combining best practices and insights from her career, Elizabeth shares the 5 key elements of a great customer experience.

From mindset, we discuss the differences between service and hospitality, customer clarity, defining what makes your organization unique and innovating to meet customer needs.

7:53    The Difference Between Service and Hospitality

For more info on the topics covered in this episode, check out:

The Power of Customer Experience: 5 Elements to Make an Impact

Customer service training shouldn’t be something you have to do, but something you get to do, to empower the event staffs that serve your fans and represent your brand.

In this episode, David Millay and Katie Rudy break down the the key components, resources and best practices to running a more captivating training.

Inspired to transform your training?  Get started with this event staff service training toolkit, chock full of the components to include, event checklists and email templates. 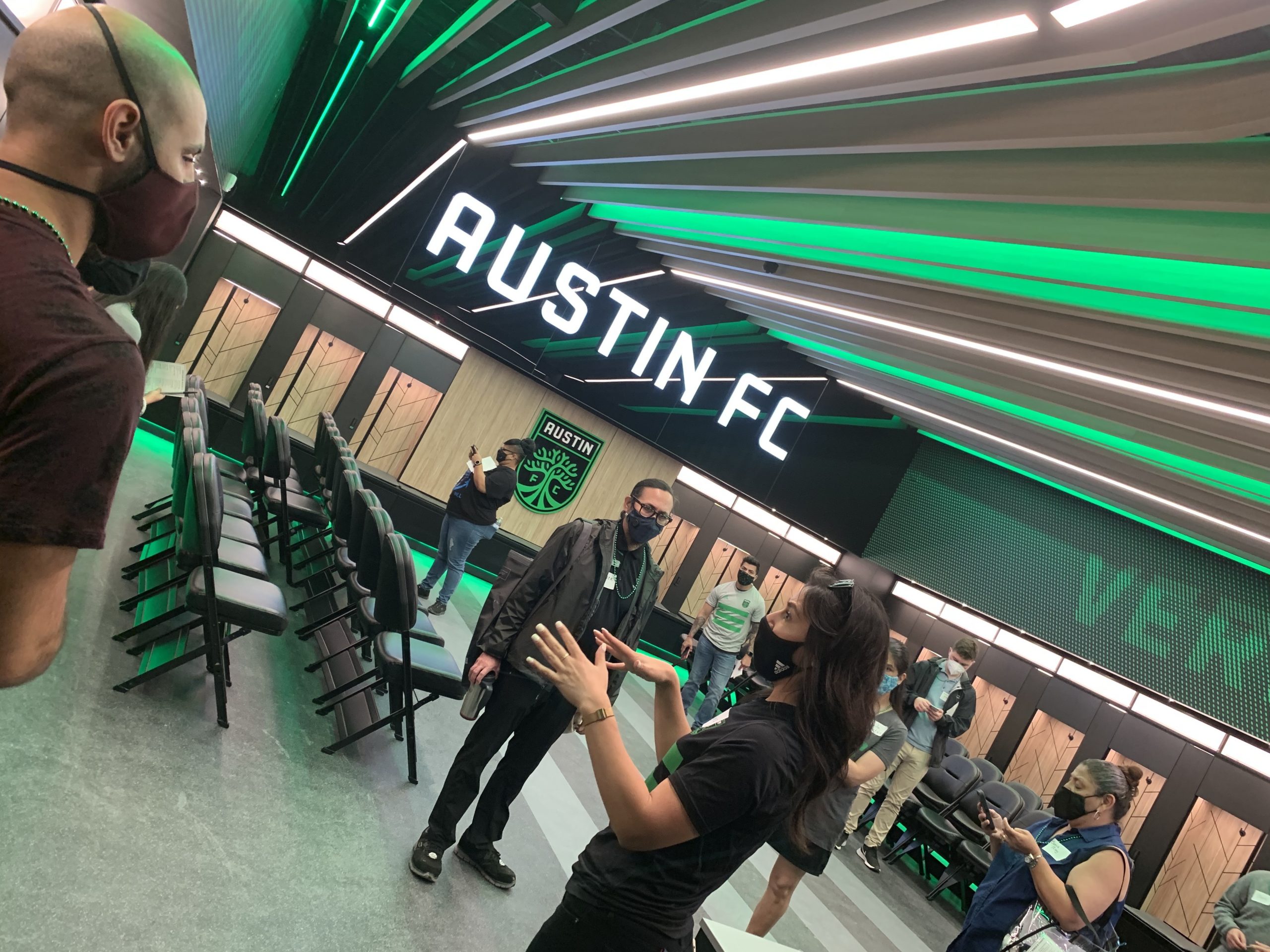 Training Staff for a New Venue

At Disney, there were three things we consistently heard from Guests when we asked how they wanted to be treated.

These principles can really be applied to any sports & entertainment venue around the world. As we help Austin FC open their new MLS stadium, we based much of our training off the top two principles.

Here’s the approach we took. As part of our Service Standards, we built an Austin FC specific standard focused on the individual. Austin has become one of the most eclectic cities in the US, with cowboys and hipsters, first generation Americans and tech bros from California. So the focus on the individual was extra important for us here.

To make every individual fan feel at home, we crafted specific behaviors and training points to encourage staff interacting with fans on an individual basis. We trained staff to look for little details that would give clues to a fans’ passions. Staff are encouraged to let a guest know they love their cowboy boots. If a fan has the same hat as a staff member, the staff member is rewarded for telling the fan “that’s a great hat, I have the same one!” Staff are incentivized to seek out fans from the other team, asking where they’re from, and if they’re from out of town, suggesting they check out the local Austin concession stand.

In a stadium of 20,000 people, each of our fans want to know that we value the time and money they are investing in coming to watch Austin FC in person. And we know if we want to keep them coming back to our venue, we’ve got to make them feel like an individual, like the best versions of themselves. They don’t want to be lost in the crowd, or thought of as “one of 20,000”.

How might we deliver training that equips staff with the knowledge they need to answer questions?

We know that adults learn differently. Adults are more kinesthetic learners and adults are selfish with their time. If they don’t know, “what’s in it for them,” they’ll simply go through the motions. To combat those things we know to be true about adult learning, we built an interactive training. When our gamely staff showed up to training, they were greeted by supporters playing instruments and chanting. Using the same tactics the supporters use to get fans excited in the stadium, the supporters were at our trainings to excite and rally our employees before sitting down.

After an interactive conversation with the group where we discussed the service standards, the entire group was broken up into teams. The teams were then tasked with racing around the stadium to complete a series of “challenges.” These challenges either taught a new skill or provided them with knowledge and answers to FAQs we’ve anticipated. The challenges were everything from having to encountering a spill and having to call in an incident on the gamely reporting tool,  to meeting the supporters, where they learned and had to complete two chants as a group to move on. Along the way, there were bonus trivia stops and extras that the teams could take note of to share in the debrief and take time off their final team race time.

Along the way, we crafted “surprise and delight” moments for the employees, like having the full-time employees whisper “hey, there’s no activity here, but do you guys want to see the locker rooms?” Just changing the way we presented the locker rooms made employees feel like they were getting exclusive access, raising their level of excitement and ownership. And of course, at the end of the race, the winners were provided with prizes, prizes that didn’t cost us much but were truly limited run items.

When you’re opening a new venue, you only get one first impression. While it may be tempting to train employees the way you’ve always done it, you won’t have the impact you’re looking for. Since adults learn differently, you must evolve your training styles to meet that need. What you do shouldn’t be shaped by what you did before or what you did last year, it should be shaped by the needs of the people you serve. If you know you need to better train your staff to deliver incredible experiences, we’d love to help you. 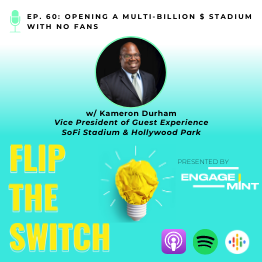 Opening a Multi-Billion $ Venue with No Fans w/ Kameron Durham

Today’s episode is all about Guest Service vs. Guest Experience and Designing Customer Experiences in New Venues

On this episode, David sits down with Kameron Durham, Vice President of Guest Experience for the entire entertainment footprint of Hollywood Park, including SoFi Stadium, the brand new home of the Los Angeles Rams and Los Angeles Chargers.  Prior to this role, he was the Director of Guest Services for the Seattle Mariners and the San Diego Padres.  In its first year, SoFi Stadium did not host any fans due to the COVID-19 pandemic.  In lieu of guests, they re-thought customer experience and service as stakeholder experience and service, focusing on the employees and players and those who are expected to deliver magical moments for fans. 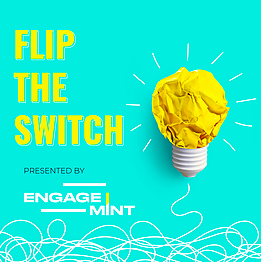 Join David and KG as they chat with guest Simon T. Bailey,  a motivational speaker, author, and life coach. Simon’s content revolves around purpose, leadership, and inspiration. David and KG get into Simon’s experiences through these lenses and how it ties into customer service.

(5:26)  Making Organizations Sizzle: The Power of Leadership, Culture, and Consistency

(6:52)  Culture is not the Mission and Vision statement on the website; it’s what lives in the head and hearts of those doing the work

(8:35)  How leaders can instill culture and care into an organization

(9:45)  Marrying top leaders’ goals with the goals of customer-facing employees

(24:37) Infusing the SPARK in your organization – Identify a champion and chase consistency

(44:38) Leading in the remote era – embrace gratitude and the at-home life

(47:31) Corporations don’t have ideas, people do.  Tap into the brilliance in your organization.

Connect with Simon T. Bailey and invite him to speak at your organization

Success is an Inside Job

Our favorite clips from our Top 5 most popular episodes.

Today, we’re celebrating hitting our 50th episode! We couldn’t have done this without all of you and we can’t thank you all enough. To celebrate, we’re taking a look back at our top 5 most listened to episodes. Counting down from #5, we’ll listen back on great moments from each episode on the list. Hope you all enjoy!

(34:51) #2 – Empowering and equipping your employees to make decisions and take action

(44:00) #1 – Leading with experience first and using the question “what if” to innovate

41. The Power of Service and Reinvention w/ Brandon Steiner

This episode is a little bit of a throwback. It’s a conversation from the end of July, but we’re airing it now, 3-4 months later. It still holds up tremendously well, as our guest’s message on service and reinvention is timeless.

Our guest today is Brandon Steiner and he’s been in the sports marketing business longer than I’ve been alive. Literally. Brandon was the founder and former CEO of Steiner Sports, which is now owned by Fanatics.  Steiner Sports started out as an effort to pair up athletes with businesses, trying to attract customers; classic sports marketing.

Before long though, the company got into what Brandon is primarily known for, memorabilia. In 2005, Brandon partnered with the Yankees to create Yankees-Steiner collectibles, where Brandon had the rights to license and market a wide variety of game-used items from bats to baseballs, you name it.

From there, he built similar deals with national brands, like the Cowboys, Notre Dame, Madison Square Garden, and many more iconic sports brands. He built a memorabilia empire, creating relationships with thousands of athletes and helping fans get their hands on exclusive items and experiences. Steiner Sports is now owned by Fanatics and Brandon is on a new journey.

Brandon is currently the founder and CEO of CollectibleXchange and The Steiner Agency. We’re going to talk about both of those ventures, among other things. We take a couple of minutes to get going, but pretty quickly we jump into a ton of different topics.

The biggest themes of the episode really revolve around entrepreneurship and how sports and entertainment organizations can ultimately become more entrepreneurial, which is incredibly important right now in this time of the pandemic where everybody’s reinventing. And innovation is key. Brandon is in his sixties now, and starting a second career.

Brandon stresses that it’s never too late for an organization or an individual to learn new skills and start new journeys. We talk about lessons learned from his parents, and we dive into customer service lessons that he’s picked up from serving millions and millions of customers over the years.